My personal experience as hospitality industry entrepreneur smoothly introduces the concept of antifragility – the ability to improve when exposed to volatility, randomness and disorder autonomously – that is the underlying fil rouge of the paper. The original intent of my blockchain journey was an incremental innovation related to the automation of SMEs accounting flows – which is still under development with local universities – but the impacts on every aspect of our society is what makes DLT utterly disruptive: if it is that we will be able to conceive decentralized autonomous communities composed by a multitude of intelligent actors within which code is the law and math guarantees truth, the current unstable governance models shall evolve accordingly.

A decentralized autonomous retailer in the 21st Century can envision an unprecedented transformation in regards to its business model, its financing, its supply chain, its organigram: blockchain – through tokenization – provides new tools that empower real economy entrepreneurs to disrupt the cartelized status quo in any industry, reassessing the fundamental values that would potentially foster talent, passion, unicity.

Blockchain governance, due its decentralized nature, is the mean enabling the achievement of direction, control, and coordination of stakeholders within the context of a given blockchain project to which they jointly contribute, concerned with its overall functioning on the fundamental topics of consensus, incentives, information flow, and governing structure that are implicated with the protocol rules, decision-making process, membership, roles, ledger history, state, and incentives.

As the technology is new, the main challenges to address are related to the issues risen in regards of the consensus of the stakeholders, the security of governance, the risk of centralization, the fairness with which policies are promoted, the rise of conflicting interests among nodes, the efficiency and effectiveness of the governance procedures, the complexity of the topics upon which all stakeholders are to be acting on, the flexibility required in order to be antifragile by design, the responsiveness in tackling emergency situations, and finally the need to have an overall purpose that is agreed upon and consequently direct the evolution of the blockchain.

The disruption blockchain technologies is reaching affects all fundamental cornerstones upon which societies are built and question the very intimate human condition: its cultural, socioeconomic, political and ethical framework is to be understood in order to address most of the challenges. Blockchain communities are composed by humans, which have common behavioral traits when handling transformative information. The rise of the Hodlers in 2013 represents the growing perception that a bottom-up movement is spontaneously blossoming as a “Black Swan”, radically changing the time preferences of those who understand the value of bitcoin as ultimate store of value. This shift from a centrally controlled monetary system towards a decentralized one is uniquely perceived according to pre-built cultural biases that are as fundamental in the DID composition as credentials and identification, as it is argued that if active participation and inclusion are to be boosted, then the information flow has to consider how that information is decoded and digested on a personal basis.

Inclusion is further propelled by a mission, a shared purpose all stakeholders consider vital in determining the evolution of the blockchain governance. As the central authority, at the current socialist proportions, is not justifiable and understandable anymore because of the technological disruption enabled by blockchain related innovation, the focus on develops a libertarian culture is essential in order to exclude the possibility of a techno elite overtaking traditional central authorities. The freedom of the individual to do anything he considers legitimate to improve his personal condition, his natural right of property, the bottom up free market driven dynamics that burst wealth generation and general improvement (with price as its universal truth), the impelling need to fight coercive taxation that aliment the bureaucratic parasite apparat originally born during the Neolithic revolution, the absolute need to have plural and factual information and empowering education, and finally the necessity to commonly agree on a minimized central authority that addresses the fundamental rules of the game: one is free as long as other’s freedom is not polluted. The basis of the alternative governance design is individual men’s self-sovereignty: technology is the mean towards this greater good.

The hybrid governance model is therefore an evolved form of democracy, where direct and representative democratic principles are combined with the sociocracy principles of circles. It is argued that as organizations grow exponentially in size, fractionalization into a multitude of smaller and interconnected entities is essential. All circles are internally organized based on DID profiling with a clear definition of roles based on competence and voted upon according to the lot based indirect election system and connected with all other circles via leaders and delegates that participate in the voting on a governance related issue. Consensus is reached once all members agree. It is assumed that the pragmatic, swiss, art of compromise will make all members moderately flexible in their tradeoff tolerance, as the main purpose is clearly outlined and pursued. Feedback loops allow the constant monitoring of the performance on both individual circles and in the whole community. Futarchy inspire a wider set of KPIs that measure the overall welfare.

Protocol updates are triggered by external inputs. Such inputs are gathered by off-chain smart devices that communicate with AI driven oracles. The machine learning allows the presentation of organized and untampered data upon which personalized scenarios are presented to the community. Voting on the requests are therefore made on facts and communicated on a personal level according to the DID profiling.

The conclusion is that governance models’ development must be conceived on a bottom- up approach that is as inclusive as possible. The participants shall represent all society’s dimensions a blockchain-based community is composed by: demographics, credentials and psychographics traits. Blockchains technologies are tools that must be used to guarantee one’s independence and self-sovereignty. The price is accountability on one’s actions; this responsibility is welcomed as a bitcoin standard drive renewed morality and thus induces the signing of a letter of intent with the future self. 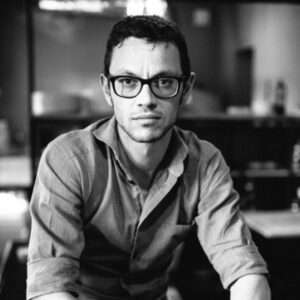 Francesco Coldesina is a passionate entrepreneur, founder, owner and CEO of Shakermaker SA, a holding company financing and managing hospitality concepts in Switzerland since 2009. After graduating in 2006 at Ecole Hôtelière de Lausanne with a specialization in Leisure and Tourism Management, Francesco joined his 4 generations’ family business in Lugano; he expanded the hospitality portfolio by acquiring hotels in Andermatt and additional restaurants in Lugano. In 2020, the Andermatt cluster has been sold and Francesco’s focus shifts towards blockchain technologies applied to real economy dynamics like SMEs processes optimization. In 2021 he successfully completed the Blockchain Global Master Program at Zigurat Institute of Technology with honors. He is fascinated by the possibilities blockchain technologies entail in regards to financing, governance, supply chain, marketing and accounting. He works with local companies and universities to launch new blockchain-based solutions on the market. He highly values customer centricity, authenticity, free market dynamics, transparency, and instills in all the stakeholders involved the virtue of hard work and infinite time preference.

His wife Claudia and his son Lenny are the major sources of inspiration and joy, while he profoundly enjoys outdoor activities in the Swiss mountains to reload his energy levels. Music is an essential element in his life both in personal meditation and self-expression while playing guitar. Finally, he loves football and he actively supports local teams by coaching young football players and Inter Milan is his beloved professional team.